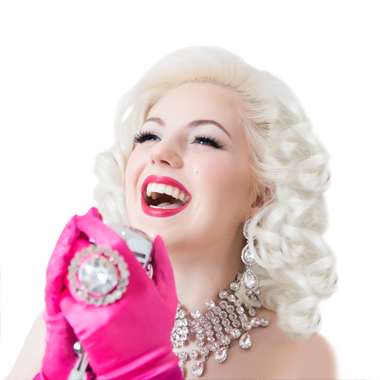 Charley started performing at the age of three and trained at the prestigious ‘Northern Ballet School’ in Manchester where she completed a three year course in Dance, Singing and Acting. During her time studying Charley was also selected to create some works for young aspiring performers, combining music and movement at ‘Bridgewater Hall’ in collaboration with ‘The Halle Orchestra’.

Since graduation Charley has appeared in many productions throughout Europe including ‘Jack and the beanstalk’, ‘Oliver’, ‘The Nutcracker’, and ‘Aida’ and has also appeared in various advertising campaigns. Recognised as one of the leading Marilyn Monroe lookalike and soundalike’s in the U.K, Charley has performed as Marilyn at major events for corporate clients around the world. She has also worked alongside many celebrities and was even asked to appear at an event for the then British Prime Minister David Cameron. She can currently be seen in the award winning national tour ‘The Rat Pack Is Back’ singing Marilyn Monroe’s biggest hits including ‘Diamonds Are A Girls Best Friend’, ‘My Heart Belongs To Daddy’ and ‘I Wanna Be Loved By You’.