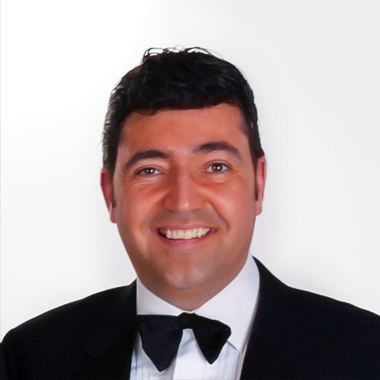 Paul is recognised as one of best swing vocalists of his generation, performing with Big Bands and Jazz ensembles worldwide for many years. His interpretation of Dean Martin who he has admired since his youth is recognised as one of the most authentic in the UK, which is why he was asked by the Producers of Britain’s original Rat Pack show to take on the role for a European tour. Seven years on and he still performing in the show with great success worldwide and on Television shows such as “Strictly Come Dancing” and “Inside Out” for The BBC.
Paul is also an outstanding trombone player, band leader and arranger and is in high demand as a Musical Director for productions throughout the UK and Europe. Influenced by greats such as Tommy Dorsey and Glenn Miller, he studied music at the University of Birmingham and soon went on to become one of the youngest Big Band leaders in England.
His band won various prestigious awards and Paul is also responsible for the vocals in the band. One of the highlight’s of Paul’s career was when his band was chosen to perform at a charity concert held at The Royal Albert Hall and he was asked to not only conduct but also sing classics to over five thousand people. He was also featured on the BBC Young Musician of The Year competition.
As either Dean Martin or as a Musical Director, Paul has toured in Bahrain, Dubai, Holland, Monte Carlo and many more locations word-wide. Paul has also worked as Musical Supervisor alongside the likes of Don Hunt, Colin Campbell and Mike Alexander while working with Entertainers including – Mel Torme, Buddy Greco, Anita Harris and Vince Hill.
In his limited spare time, Paul can either be found on the golf course or relaxing with his wife Mel and their three young children.