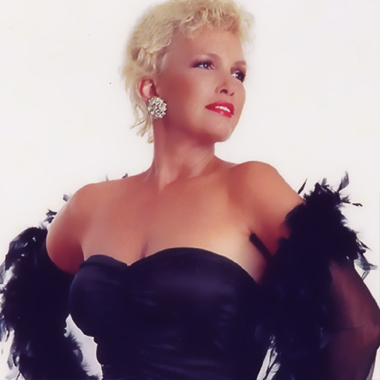 Moving to Las Vegas in 1992 Lezlie began a two year engagement at The Desert Inn’s Starlight Theatre, where she supported stars such as Frank Sinatra and Liza Minnelli during their performances in The Crystal Showroom. It was there that she met husband – the legendary Buddy Greco. They began to work together and she joined Buddy’s show as a featured artist. Lezlie and Buddy, have completed 5 acclaimed world tours, two television specials, and seven recording projects, in addition to a very busy performance schedule in Las Vegas. In the late nineties Lezlie performed a live dance show “Las Vegas Live Tonight” at The Flamingo Hotel featuring her with her band and special guests, which was broadcast live from Las Vegas every Friday night for two years. Her first solo album “With Love, Lezlie,” (Celebrity Records) features such jazz notables as Buddy Greco, Don Menza, Carl Fontana, and Joe Lano. She is currently recording two CD projects, “Torch,” a collection of ballads, and “Dance Party. Lezlie devised and produced an award winning salute to the great Peggy Lee called “Fever” which has toured the U.S with her orchestra and dancers to great success including seasons in New York and in Vegas at The Orleans Hotel and Casino.