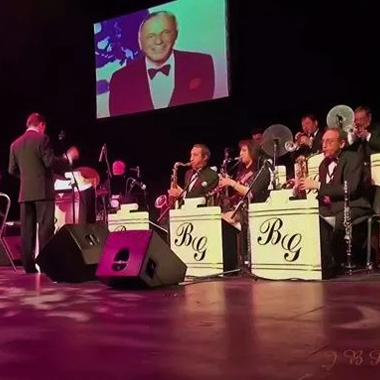 In 2010 the Legendary Buddy Greco who was part of the extended Rat Pat Pack scene at The Sands in the sixties and a close friend of Frank, Dean and Sammy, toured with The Rat Pack is Back for 32 sell-out shows. He enjoyed the tour so much that he and his wife moved to England for four years, becoming a close friend with David Alacey and continuing to work on shows with him and the rest of The Rat Pack cast. During this period he gave the guys many gifts including the fact that he is Godfather to David’s eldest daughter Liza. He also recorded a duet with David for his final recording project “One for My Baby” released by Acrobat Records. However when returning to Vegas in 2014 for his retirement, he gave David the greatest gift of all – his Orchestra! Featuring the cream of British Musicians, all of whom toured with Buddy between 2010 and 2014. The gift included not only the musicians but the famous BG music desks and his incredible music library of orchestrations from over 70 years of touring the world. These arrangements have been played by Buddy and other legendary musicians such as Count Basie and Buddy Rich. Now they can be heard once again being played by his fantastic orchestra in The Rat Pack is Back! Buddy personally chose the man he wanted to lead the orchestra and as always his knowledge of music and great musicians was spot on, as Don Hunt has worked with every musical giant during his unparalleled career as a Musical Director. These include Bing Crosby, Anthony Newley and Sammy Davis Jnr. He is best known for his work as Musical Director and Arranger for Howard Keel who he toured the U.S.A with for many years and here in the U.K – Sir Bruce Forsyth, who he worked with for over 40 years.

With The Buddy Greco Orchestra under the direction of Don Hunt – The sounds of Sands really are recreated with unique authenticty.