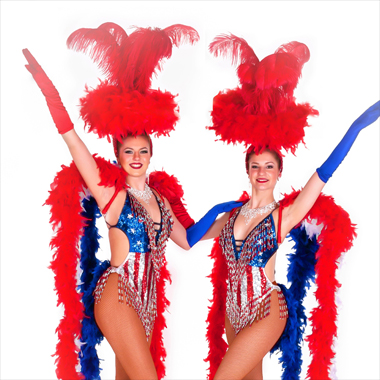 The L.A Showgirls were formed by Legendary U.S singer, actress and dancer – Lezlie Anders in Las Vegas in 1992. Originally to dance in her own celebrated show at The Desert Inn they soon went on to perform on the famous strip for stars such as Buddy Greco, Jack Jones, Jerry Lewis, Don Rickles and Al Martino at famed casinos including – The Flamingo, The Sahara and The Gold Coast. With stunning costumes designed by Lezlie and amazing new dance routines,The L.A Showgirls brought the glamour of the sixties showgirl Vegas heyday back to life for a new generation.  With an ever growing reputation for quality and professionalism the group soon became recognised as one of the classiest and stylish in modern Las Vegas. However work was not limited to the strip as the Showgirls often travelled to Los Angeles for product launches and corporate events for clients such as Ford Motor Company and Budweiser.  Now The L.A Showgirls have arrived in London with many of the costumes used in Las Vegas and original routines brought to the Europe for the first time. Already The L.A Showgirls have built up a major following in the UK with dates booked well into 2018. Theatre tours include Lezlie’s acclaimed “Fever” show and the original British Rat Pack show along with The Frank Sinatra Centennial Tour featuring Kenny Lynch and Anita Harris. Acclaimed British choreographer Charlotte Tollan has joined the organisation to revise some of the classic routines and give a modern edge to the business for the U.K market. So look out London – Vegas has arrived via L.A!